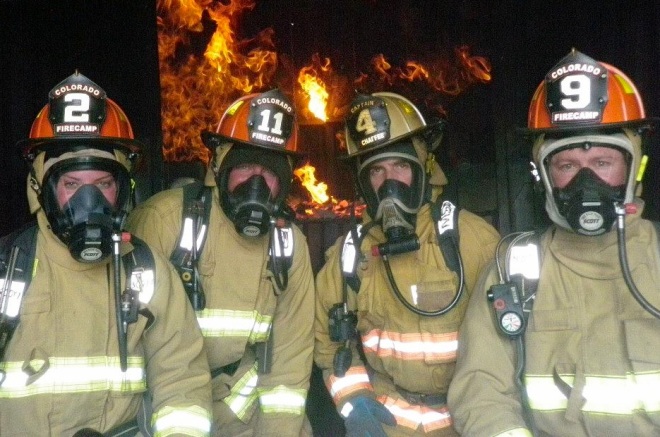 During the first year in 2004, there were around 37 applicants at the Colorado Firecamp. This year, there are 900 students and that number is expected to grow to around 1500 in the near future. Photo credit: Colorado Firecamp.

I live in Chicago. In terms of inconveniences caused by intense heat, my greatest bother is having to schlep my window A/C unit up from storage during that one week in August that makes sleeping tricky. I’m not impacted (directly) by wildfires, but that doesn’t mean I haven’t noticed a marked increase in news coverage of impossibly large fires. While listening to the radio recently, an interview with a firefighter in Colorado confirmed that due to climate change and changes in the ways that we build and live, there really isn’t a fire season anymore–”every season is fire season.” 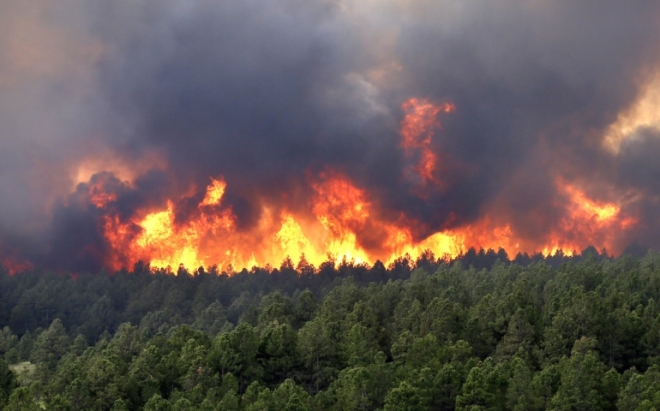 2012 was an especially devastating year in Colorado, with several separate fires occurring in June, July, and August 2012. At least 34,500 residents were evacuated that June alone. By the year 2050, the number of wildfires are expected to increase by 50% in the West and to double across the U.S. 90% of these fires are caused by humans. Photo credit: CNS photo/Rick Wilking, Reuters.

To learn more about what is being done to cope with these fires, I called up Kent Maxwell, founder of the Colorado Firecamp. Kent, a volunteer firefighter himself for 25 years (and a Captain for 12 years) got the idea to start the school in 2002 after experiencing a shortage of help during some especially massive fires, including the Iron Mountain Fire that took out 133 homes and 138,000 acres of land. He decided to use his family’s land and start a school to train more firefighters and by 2004, the program was up and running. 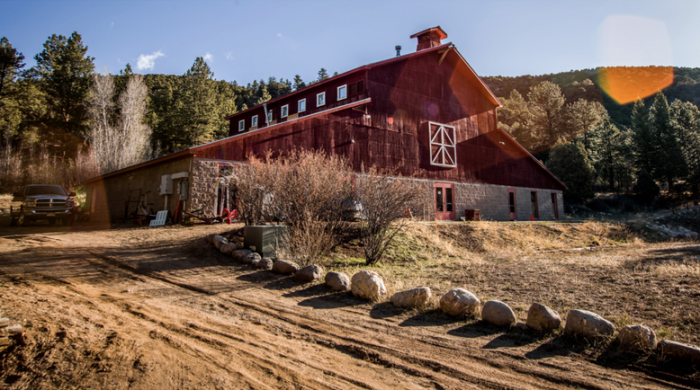 Kent began the firecamp on 40 acres of land owned by his parents. Facilities on the land consist of 13 buildings, including a lodge, a converted barn (above), a gym, and several out houses. Photo courtesy of Peter Marshall, http://www.pamarshall.co.uk/

Today, the Colorado Firecamp is a 501c3 nonprofit wildland firefighter school that trains about 900 students annually. Yes, 900. The skills are universal, but there is also a focus on local community, so the firecamp has partnered with local fire departments and land management agencies in preparing for emergency response, conducting wildfire mitigation, and performing forest restoration work. The camp is also a nationally recognized advocate for firefighter safety and the country’s largest chainsaw tree faller training program. 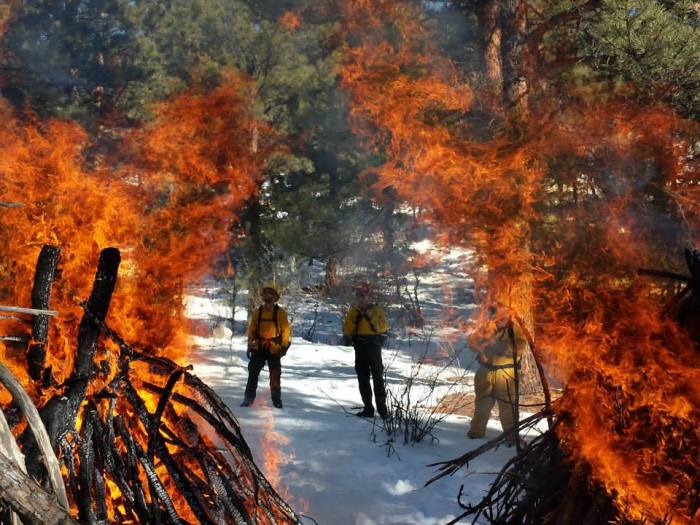 Some sobering statistics from the Insurance Information Institute to drive home the importance of the work that Kent, his trainers, and his students are doing: 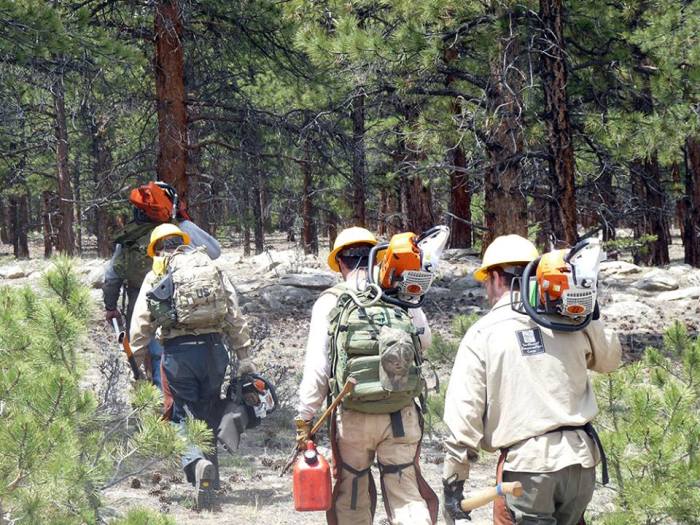 Many of the students are veterans who served as a response to 9/11. The camp became the recipient of an 800 pound steel column salvaged from the World Trade Center, dedicated on the 10th anniversary of the attacks, which is now the centerpiece of a memorial flagpole. Training men and women who served in these wars to now protect our public lands and western heritage has became a central mission for the camp. As Kent explained, “many veterans are attracted to and used to difficult, exhilarating, physical work outdoors, so this kind of work really suits them.” Veterans also need help reintegrating after serving – another focus of the programm – and the camp was recently approved as a G.I. Bill school, which helps ease the burden of training costs. 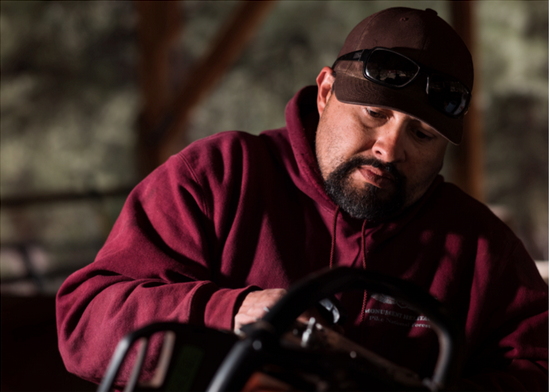 Having well-maintained chainsaws and other equipment can mean the difference between life and death in the field. All students are trained extensively  on how to service their equipment. Photo courtesy of Peter Marshall, http://www.pamarshall.co.uk/

While much of the work at the camp involves taming fires, wielding chainsaws, and a variety of extreme physical activity, the other side of training is making sure things run as smoothly and efficiently as possible. Firecamp students are preparing for highly dangerous scenarios, but things would be considerably worse for them if their equipment and chainsaws weren’t in good working order during a fire (or really, even during a training). Kent selected a list of tools needed to maintain this critical equipment, and we worked with Craftsman to secure a full donation. 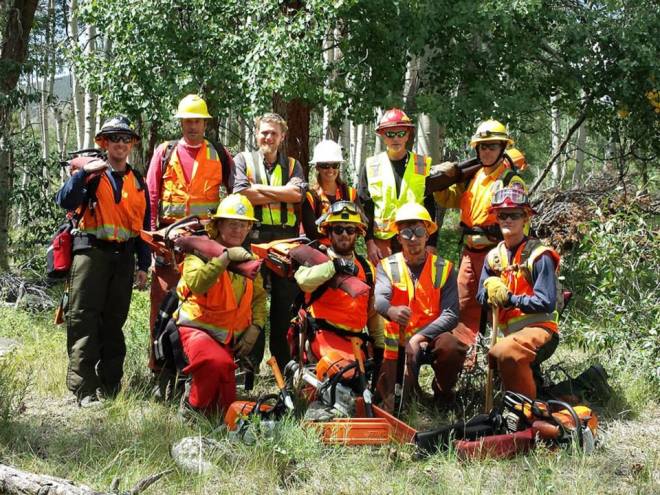 I’ll follow up with the trainings in the coming months, but for more info on the incredible work that Kent, his forty instructors and hundreds of students are doing, check out the Colorado Firecamp website and Facebook page (there are many more incredible images on Facebook), and listen to this interview on NPR’s “Talk of the Nation,” which describes what it really takes to do this kind of work.