Five years ago, five residents of Chicago’s West side Pilsen neighborhood sat around Sallie Gordon’s kitchen table and decided that they needed to acquire a vacant lot and create a space for locals to congregate and grow food. People needed a source of fresh, healthy, affordable produce, and the community needed more cross-generational and cross-cultural interaction. After a long search and some support from local organizations and officials, a garden, now known as El Paseo Community Garden, was built in July of 2009. For most people who lived near it, it was the first community garden that they had ever seen. 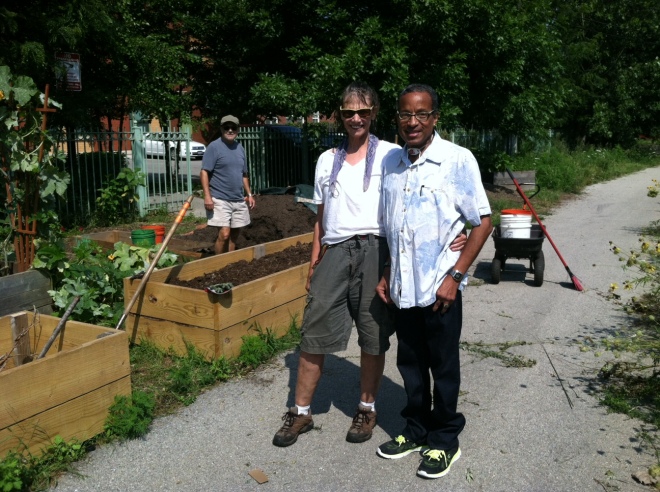 (Left to right) Ron Gordon, Sallie Gordon, and Harry Irizarry, who acts as a translator to foster cross-cultural communication at the garden.

While we filled more raised beds this weekend, countless residents, whether they volunteered at the garden or not, used the long pathway between the gardens and native prairie to walk their dogs, ride their bikes, and stroll with their families. It certainly beats any of the parallel streets. Appropriately, “El Paseo” means “The Walk.”

In 2009, there were 6 raised beds, built with the help of 15 volunteers. When I visited there this weekend to bring over a Craftsman round point shovel, spade, and leaf rake (and, of course, to get my hands dirty) there were 27 beds and over 30 people involved with the garden. Groups like Greencorps Chicago helped to expand the garden considerably in 2011, and some residents like Antonio Acevedo have really stepped up to take on major projects on the land like constructing a rain collection system and building compost bins and a tool shed.

Antonio Acevedo, a civil engineer by trade, has volunteered for four years now and built a rain collection system and other structures in the garden as well as managed many of the projects on site.

This area of the city has also had serious environmental issues to contend with, including high levels of lead in much of the soil. Beyond using clean soil and compost and building raised beds, the entire length of one side of the garden contains prairie plants, which help to remediate the sins of the past (it also happens to look incredibly beautiful). They also obscure the railroad tracks behind them—many believe that the railroad and how it was used historically is a contributor of the contamination they have to contend with in the area. Some residents have planted gardens in areas that have unsafe soil, unaware that their attempts to providing themselves and their family with free, fresh food is (very) unfortunately not a healthy practice. Another reason why these kinds of community gardens are hugely important in this neighborhood.

Carlos Nunez, Sallie, and Raúl Sandova glowing in front of a newly built fence last year. The amount of volunteer work that has gone into this place is astonishing, and you can really see just how expansive this garden is in this picture! (Photo by Ron Gordon)

Beyond helping to fulfill a need for a healthy, free source of food, the garden is located near senior housing and is an outlet and gathering space for many older residents, many of whom grew up on farms in Mexico. The site also acts as a Monarch butterfly sanctuary, holds potluck summer dinners, evenings of guitar music by residents, volunteer days, workshops, high school class visits, children festivals, and tours to a variety of groups.

The garden has also always worked with the Pilsen Community Market, which was started by Ron Gordon, Sallie’s husband, who is an architectural photographer by trade and who has lived in this neighborhood since 1973. Ron is also very active at El Paseo and has done a lot of regular maintenance and building on the land, not to mention documentation of the progress and events through the years–check out their Facebook page for several years worth of images. 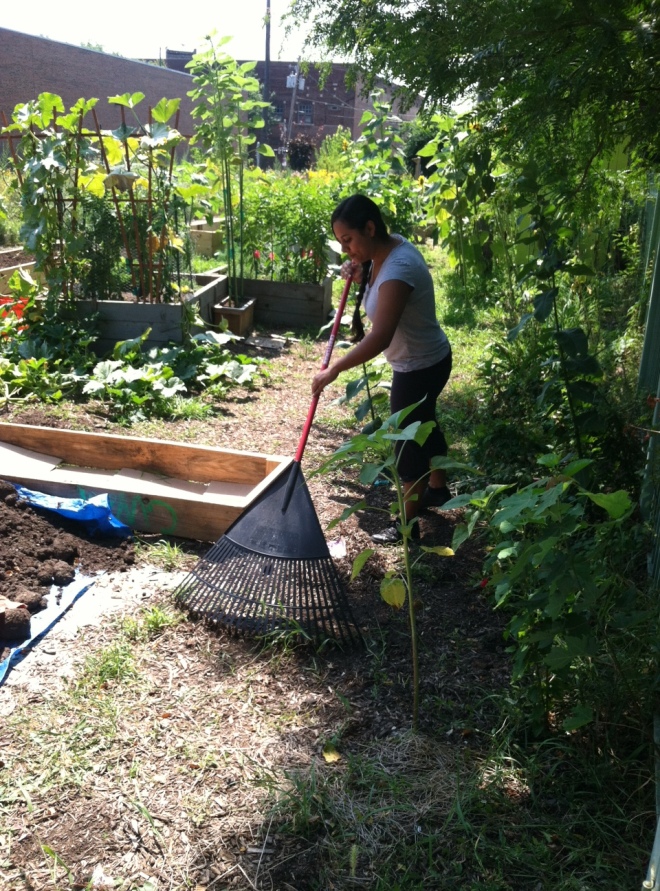 Paula Villa, an active volunteer for several years, tidying up.

According to Sallie, more and more people keep coming to the garden now, and after almost 6 years, she believes the garden is strong now and can survive. “There is always more work to be done and all are welcome. What we need most is more hands to work and use all of this beautiful land!”

I mean, who wouldn’t come here to eat lunch?

About sums it up. (Photo by Sallie Gordon)