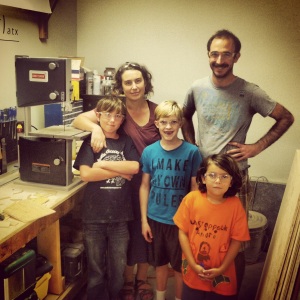 According to Kami Wilt, founder of the Austin Tinkering School (and apparently the most awesome parent in the world), “failure is a really good thing.”

Now I’ll be honest, I’m super Type A and don’t work with kids often, so I required further explanation. According to Kami and a number of people researching this stuff, schools today make kids so failure-adverse that they are afraid to try anything new or unchartered, thereby turning them into less creative and more fearful little beings who are not only going to have less to offer the workforce when they are a older, but who also don’t get to have nearly as much fun as we did. Yes, this would qualify as depressing. But, of course, there is hope and a movement is afloat, or I’d have written a different article.

The Austin school isn’t the first or last of its kind–in fact, there is even one in my own city that I had no idea existed until this week. The original Tinkering School was started in California by a software engineer named Gever Tulley. About six years ago, Kami, who has three kids of her own, saw his TED Talk called 5 Dangerous Things (you should let your children do) and she just couldn’t let the idea of tinkering go. She obsessed about how Austin needed this and tried in vain to get anyone she could think of to start up an branch until she accepted that was going to have to do it herself. She had a history running a preschool as well as teaching art, science, nature, and carpentry classes, but felt in no way qualified to teach kids about these things…until she did. She got help from people with open minds and experience working in skilled trades and just launched the initiative in her back yard, where most of the classes still take place. The school has slowly evolved and grown into camps and classes for kids and even adults, and a second location at a shared space was just recently opened. 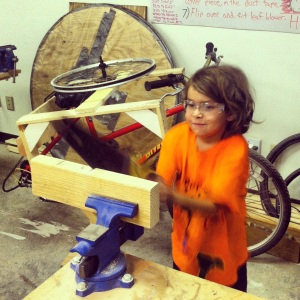 Andre learns more basic but rewarding ways of sawing. He was at it for a good half hour and could not have been a happier person if he were cutting into blocks of milk chocolate for consumption.

So I wrote to Kami once Sears offered me the chance to give away a bunch of tools and asked what the school needed. Her answer was a resounding “BAND SAW.” Apparently, at one point, Gever Tulley mentioned that a band saw is what he would take with him on a deserted island–amazingly trumping things like “pizza” and “electronic solitaire,” which are obviously my go-tos. So a local friend picked me up in the family car and we bought a Craftsman 10 inch band saw, a replacement blade, and some rather handsome (size small) work gloves and drove it all down to the school.

My time in Austin was limited so we arranged the visit during an open shop they had with kids ranging from 6- to 10-years-old. Yes, they were adorable and yes, I was providing them with something that could take all of their cute little fingers off in about four seconds. But then I remembered how friends of mine growing up had jobs like “dangle down the laundry shoot and grab dad’s snagged t-shirt” and “clear out that clogged lawnmower blade with your small, nimble hands,” and with considerably less instruction. I relaxed. 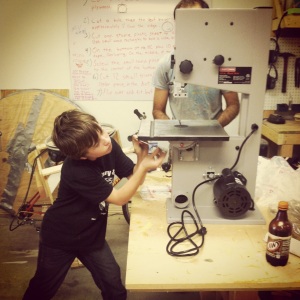 Jack assembles a band saw without pause the minute it’s pulled out of the box. You know, like he’s making a sandwich or something. No great shakes, right?

Kami’s son Jack (age 10) started assembling the band saw the minute I pulled it out of the box and we were up and running in no time, no blades flying or kid digits lost. There was also no instruction on what should be created with this tool, the kids just did whatever they felt like. Apparently this is also key. There was a recurring theme that the teachers were not actually teachers but collaborators and they stayed out of the way of the kids’ projects.

That said, yes, yes, there is always plenty of safety training and explanation before the kids use the tools. One of the biggest issues with teaching kids to do things is keeping the parents out of the process. Generally, if they are young enough and not yet afraid of failing, they will just keep trying something until it works how they want it to. That ability to change gears when necessary and try new things when an experiment doesn’t work is incredibly valuable and becoming increasingly rare. There are some other places that offer classes to kids, but they typically use kit projects (I may have heard the word “lame” used in conjunction with them) that have pre-made pieces and a uniform, expected end result. Bottom line: this is not especially useful and certainly not as fun. 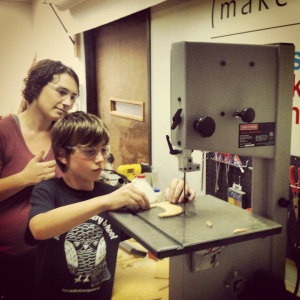 After a brief safety lesson from Kami, Jack goes to town.

If kids never learn how to deal with things that can hurt them, they’ll get hurt when they finally encounter them. The world is full of potentially dangerous objects and people and the best way to protect yourself and your kids is to learn how to manipulate, respect, or navigate these things. Sooner or later that child is going to happen upon non-rounded objects(!), fire(!), or an inconvenience of some kind that must be dealt with(!). Better to prepare them because you won’t always be glued to them, and let’s be honest, a lot of adults could stand to take some classes as well. I seem to remember my father wiring all of the dimmer switched in our house backwards. 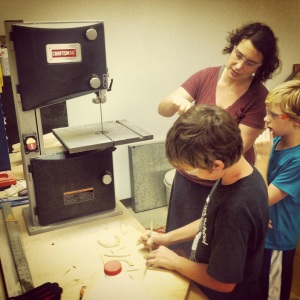 Jack and Kami teach Luke how to use the saw. He jumped right on it with a huge grin and cut away about a minute after this was shot. Easy peasy.

I was amazed watching Jack go from assembling the band saw to using the band saw to then explaining to another student how to use it. Seriously, I could not pull him away from that thing if I had a rope and a skid steer. I asked him what projects he enjoyed the most during his four-year career as a tinkerer and he listed things like a compressed-air rocket and a lofted bed frame, both of which he did without adult help. His 8-year old brother, Bruno, recently built a rabbit hutch. Then I asked Jack what his favorite tool was and without hesitation he enthusiastically said “the band saw(!!!),” to which I could only reply, “Wow, you really will do quite well in life. Quite well.” This kid may steal this gig out from under me.

For more on the original Tinkering School: http://www.tinkeringschool.com/