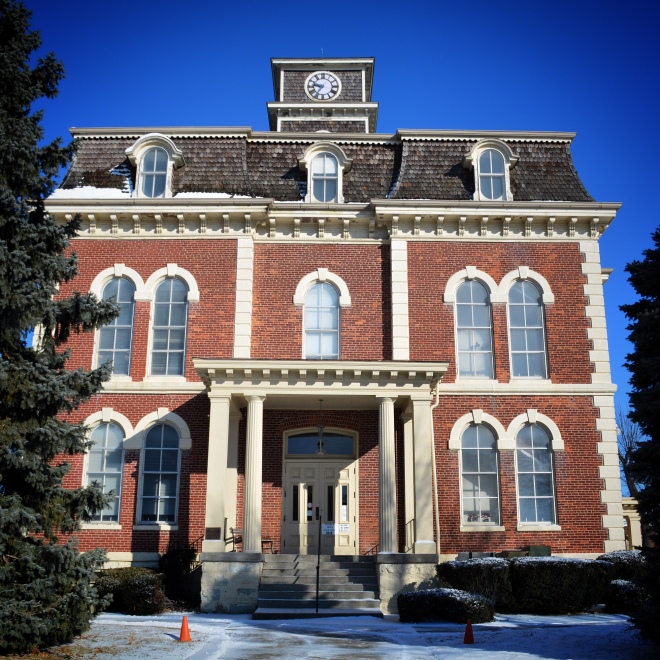 This beauty was slated to become a parking lot 5 years ago. This post is about the group that saved it and their plans for the future. They are basically a collection of George Baileys, all living in a single town.

A couple of weeks ago, I visited the Effingham County Courthouse (now the Effingham County Museum), a town centerpiece that was almost torn down in 2009 due to deferred maintenance and a tight county budget. It was, if you can believe it, slated to become a parking lot. After visiting courthouses in 17 counties all over Illinois, I learned that this was a relatively common story.

Ever see the top of an historic courthouse dome? Neither had I until recently. NEAT. They have plans for this puppy as well.

Effingham is one of those counties fortunate to have a group of visionaries who saw the value in keeping the building that set their town and business district apart. There were dissenters in the beginning, but with some grant funding to help restore and enhance the grand entryways to the building, loads of paint and furniture donations, and over 35,000 volunteer hours, the newly formed Effingham County Cultural Center and Museum Association was able to sway most of the nay sayers. A ton of work has already been done and the impacts have been felt with the opening of 4 or 5 new businesses on the town square, which surrounds the courthouse, and this highly visible restoration work and can-do attitude is also having a ripple effect around the business district.

This is the 2nd floor before the building was taken over by a group of concerned citizens who couldn’t bear to see the building demolished. This was obviously a remodeled version of the 1870s courtroom (ohhhh, those ceilings are painful), but the residents who wanted to turn their town’s centerpiece into a museum and community center had a dream of opening the space back up to its former glory. (Photo courtesy of the Effingham County Cultural Center and Museum Association)

The story was so moving and the work that had already been done was so impressive, that there was no way they weren’t getting some tools to help continue this gargantuan task of continuing to fix up this place and make it a sustainable entity, able to attract tourism dollars and events. The first floor of the courthouse focuses on the role of transportation in Effingham County history and as a cultural center focused on the visual arts with gallery and educational space. There is an incredible collection of historic artifacts and even a display of the town in miniature, painstakingly crafted by a local artist.

Ta-da!!!!! Look at that ceiling! The tin ceiling was found above that abysmal drop ceiling…but because the building is so old, there was actually an even older layer under the tin. That’s how you know something is really, really old, folks.

The original second floor opens into a single, large courtroom space with a domed ceiling with decorative metal panels. This room is incredibly dramatic and is in the process of being remodeled (and in some areas, brought back to the original layouts) to be used by local community organizations. The main courtroom space will be multi-functional and hold house museum exhibits, art exhibits, community meetings and small concerts. A large stage is in the process of being built and is absolutely killer.

In case you were curious, the oldest ceiling layer is actually made of some kind of canvas-like fabric. Yes, fascinating. They aren’t going to be able to restore it to that layer, but are keeping some of it as an artifact. We got up onto the scaffolding and geeked out on this one.

Some much needed Craftsman tools will be shipping out to the courthouse in the coming weeks and put into the hands of these incredible volunteers. Stay tuned for updates on the progress of the restoration and buildout!