For the past 7 years, the majority of my work has revolved around saving historic buildings. At the same time, one of the most popular photographic subjects has been ruin porn—taking pictures of buildings that are dying and have basically no hope of survival. When you are trying to save buildings, you find yourself inside a lot of abandoned places, but you’re researching these buildings and loving them and hoping to save them. To be honest, I find a lot of ruin porn a little skeezy and lazy. Sure, the bruised blue colors and filthy, peeling layers get our imaginations running with romantic apocalyptic daydreams, but to me, it also feels unsavory in an “I’m taking a picture of your dead grandma’s body at a wake, even though I never really even knew her” kind of way. And then I’m posting it on the internet. I’m also not super keen on the snuff angle.

And seriously, if it’s broken, pick up a hammer and fix it. What the hell.

So why feature images of “dying” trades? Well hey, there’s another reason to share photos of things that are dying—to celebrate them and potentially bring awareness to them by pulling back the curtain and exposing their process and functional beauty. I came upon these photos and sighed and smiled and immediately wrote the photographer to see if he minded my posting these. He did not. In fact, he wrote me back within 24 hours from across the world (currently photographing the Philippines/Thailand/Bali) telling me to post away, by all means. He had been photographing these trades for a while now.

These photos are all overseas, but jobs in traditional trades are plummeting all over the world and especially in the U.S. More and more jobs are shipped away or simply disappearing and replaced with cheap, sub-par substitutions made with machines and inferior materials.

These images do the opposite of glorify the end of something. The idea of going to these work spaces with one’s own tools and schedule and ability to make whatever is in your head manifest in whatever manner you please seems like a relief and a joy and something to shoot for. Would you rather go to your cubical all frazzled from train delays only to answer fifty emails that serve as fodder for your worsening TMJ, or would you rather go to these places? I mean, that’s not even a serious question in my mind. The work in these photos seems like the most normal, human way to spend one’s time and makes you question how we have gotten so far from where we were and so far from doing work that is Real. Look at their faces. These are people who have pride in what they do and do not mind going to work. The best advertisements for hope I’ve seen in a long while. 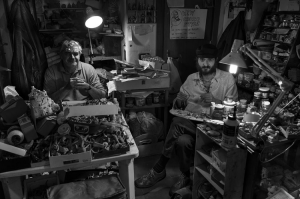 For more of Ron’s work: http://rnicolaysen.com/